MSpain, is the slowly adopted name of the bootleg DnD game drawn in MSpaint. The name comes from two obvious words combined, though originally MSpain only referred to the prototyped fighting game for the game that never got finished, while the discord server wields the name Epic Roleplay Game Night.

Discord server? That's right! The game is played through discord chat. The basis for the game is this: There is a DM and players, each player takes an action during a turn, whereupon each action and the environment is then drawn by the DM, each turn. Each action's success is purely determined by a single d20 diceroll, and they can range from splitting the Earth in half in a roll, to printing the ORB, which are examples of why while less expansive in rules, presents more freedom than the more formalized alternatives.

So how does it work, exactly?

First note that each DM does adventures differently and rules differently, however these are how they are done most commonly (And by me).

An adventure can be an encounter, monster, dungeon or anything like it drawn by the DM beforehand. You come in to the adventure to interact with it (wow!), and can do whatever your heart desires, unless you die (rad!). You are however limited to 1 action per turn. Each adventurer has 10hp, and that's usually the amount of health for enemies as well. When doing an action that is to take hp away, as in basic attacking, a roll table is used for damage. Since other actions can be unqantifiable like for example "I give jerma a jar of mayonnaise", the roll is for DM's interpretation, but still mostly adherent to the roll table. Note that roll tables can slightly differ between DMs as well as other details.

Ignore the BOT marks, this is for visualization purposes only. Also a lot of the dialogue might seem stilted, as that's for clarity's sake, but there can be skips in "obvious" things, or shortenings to "Whatchudu" and "Drawtime", for example.

Below, we can see a DM saying that they are running an adventure. It will mostly be something along the lines of "Who joining for da X adventure?" and wait for players, or show off the encounter and add people as they join, depicted here. To join an adventure, you simply state, that you want to join. That's it. You might want to add what character you play as if you have multiple, and it is not your main character, but more on that later. Most first player characters were based off people's profile pictures, you really don't need to go in-depth with anything. 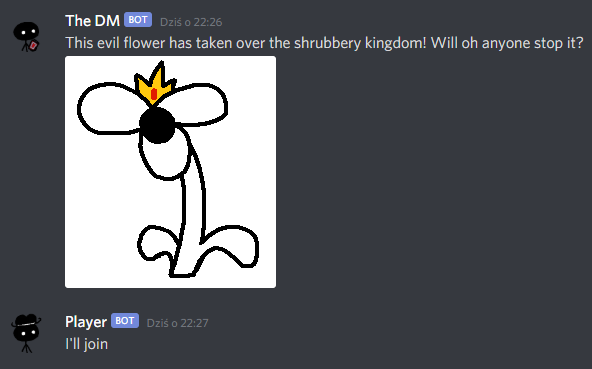 As mentioned, the DM draws the players. Taking an action is as simple as saying what you do. The DM rolls the dice for your action, and if there are many messages, the DM can use the reply feature to clearly indicate someone's roll. Remember that you are not limited to actions such as "Do something that deals X to Y". 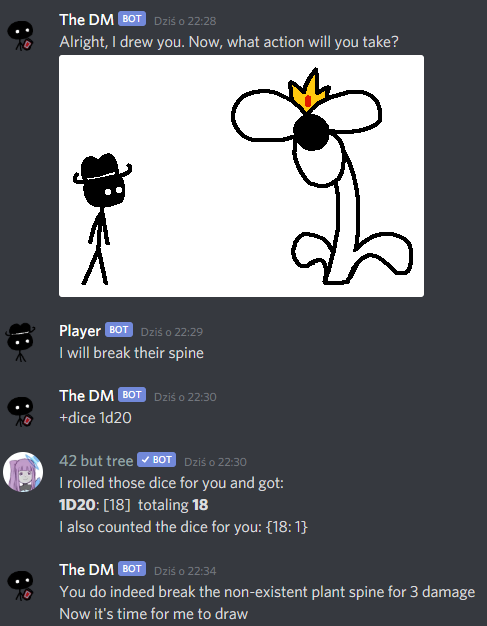 After all actions are taken by the players, the consequences of those actions based on their success are drawn. As we can see, the player rolled an 18, which would be a 3 in the roll table. Personally I use one without 3's but it's more common for them to appear. Here's a roll table example:

1-2 critical fail, you take 1 damage or something bad happens

3-5 miss, or nothing happens

17-18 3 damage, really good or even better than expected outcome

19-20 critical success, 5 damage, does what you wanted perfectly if it's not too much (aside from specific instances when even with DM's interpretation it might be breaking something majorly) 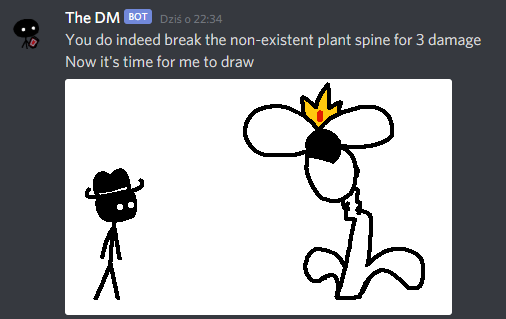 Enemy turns play out after player turns, and work exactly the same way, except the DM controls all the enemies. Sometimes allies that are not part of the team but are on the players' side take their actions during this. 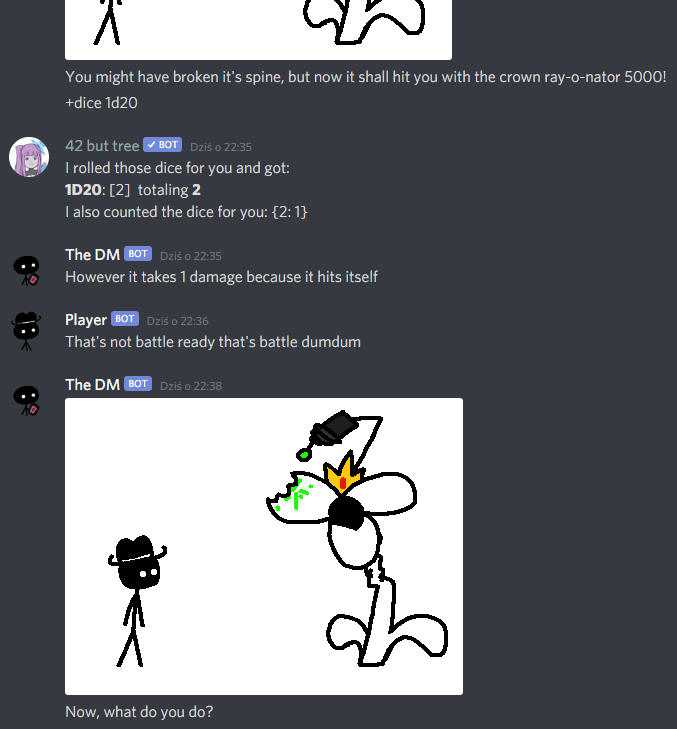 Players can join during an adventure anytime (during long adventures the DM may choose to put them into action or at the beginning). Just ask as in the beginning! 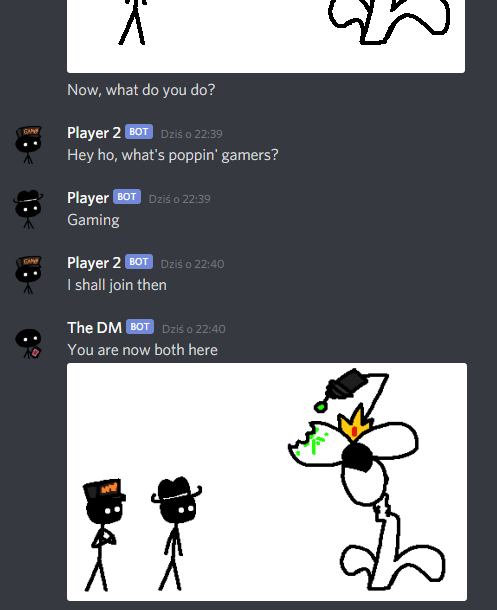 With multiple players actions are usually taken in order that they are said. The "+1" mentioned here is a boost. When rolling to get a boost, or getting one from something, that number is added to your roll (For example, rolling an 18 with a +1 is a crit success). 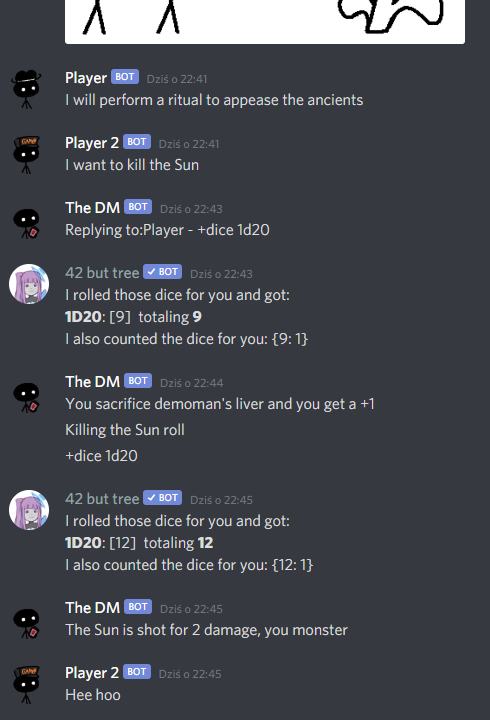 Bonuses are usually displayed on drawing for ease of reading. HP used to be something kept in the players' head, but it's useful for the DM to have an excel sheet/notepad open with HP and boost values of everything. 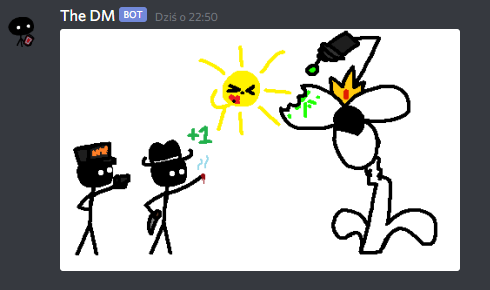 Adventures usually end when a certain point is reached, such as the players completing the objective at hand, ending it in a completely different way (More common for open adventures), losing by everyone dying or the DM setting up a turn bomb/limit near the end because they have to go and the adventure doesn't require a second session. Archiving an adventure means pinning usually the last frame of the adventure in the archive channel, with a short description of what happened, and perhaps some notable "lore changes". 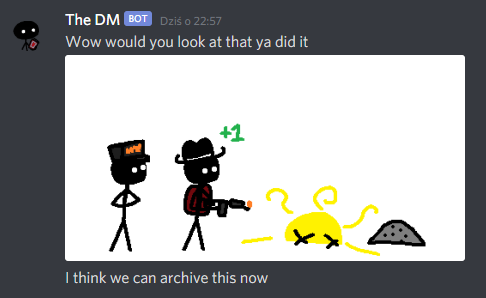 When death comes, the player that died immediatly gets a wish action. It can be anything and is usually taken more powerfully than a normal one, but still is confined by the dice rolls. Wishes still happen even if the player that died was the last one. Reviving through wishes was eventually said to be "Not very cool", and any kind of revival during an adventure through any other means as well. 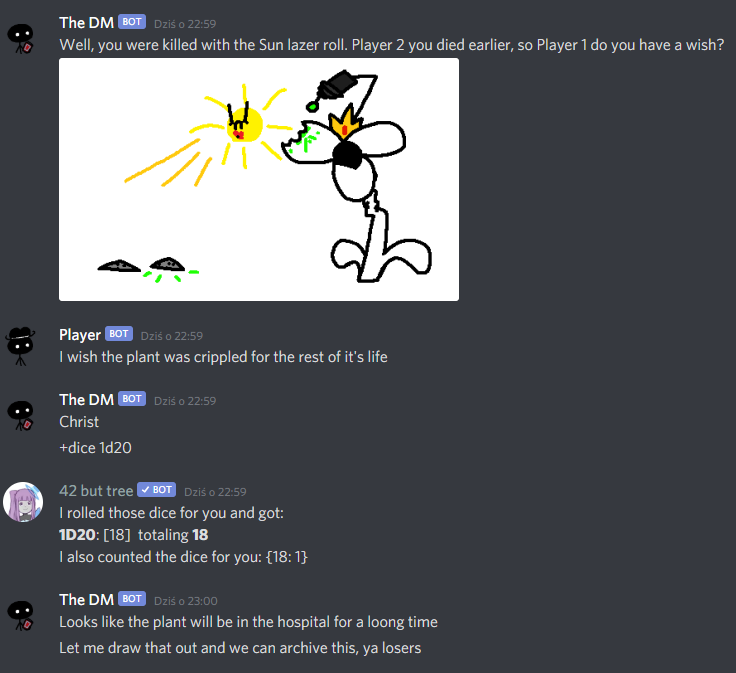 Violence might not always be the way. Making enough RP over time or just friendly actions might make an entity like you. If that happens, you have a chance to recruit it and have it be part of your party. You can call it during an adventure, or just play as it for an adventure. 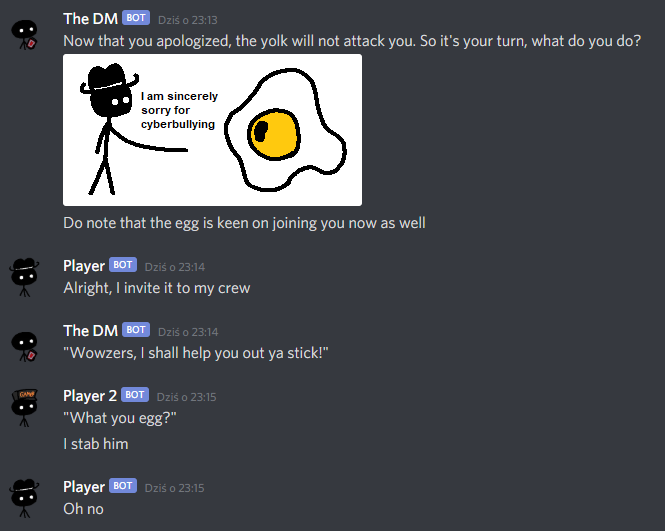 How to play as a recruit? Simple. Just ask at the beginning of an adventure. 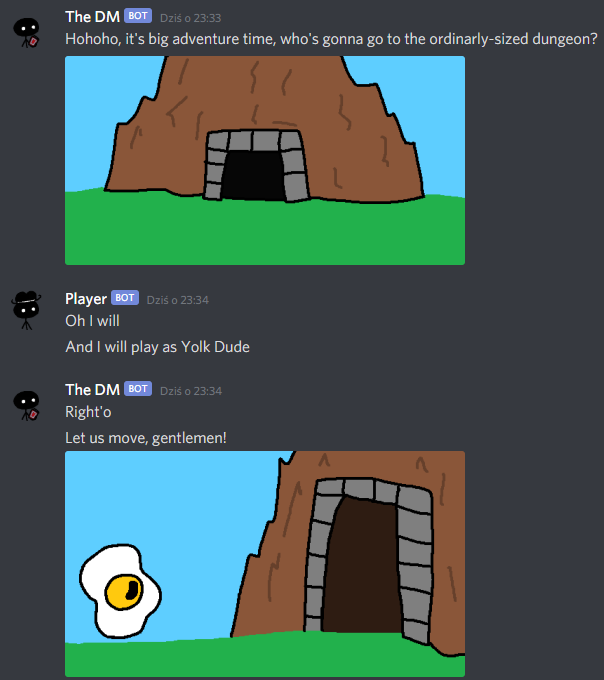 If you're not sure what the HP of an enemy (or yourself) is, just ask and you should be able to get an answer. Summoning an entity is as easy as anything else, and gives you a new vessel for control. 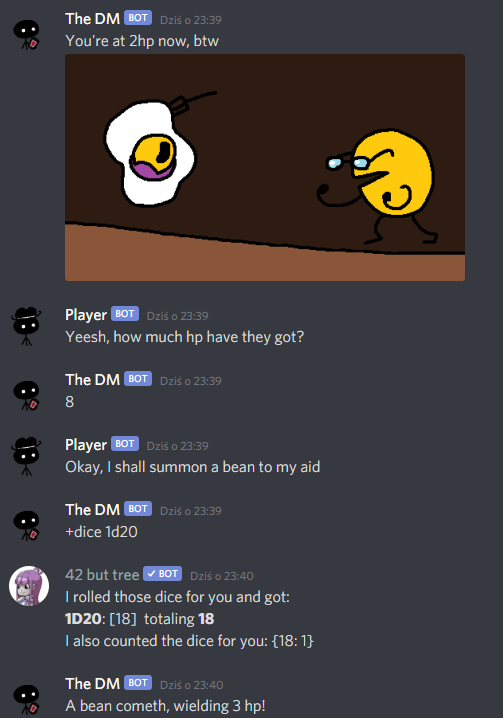 Summons usually have the hp worth equal to damage that would've been done, or 10 HP in certain situations. Summons are usually not auto-recruits for the summoner. The difference between getting a recruit and summoning something, is that getting a lower roll for a recruit to come to aid usually means that they will come in a few turns, instead of failing. Also you can have some development with recruits, or just do it for the sake of having friends. 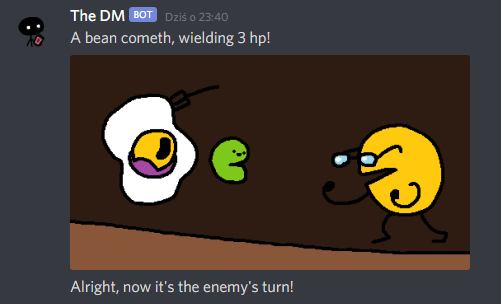 Multiple characters take actions independently, with different rolls. You may or may not put them in one message, as to change the plan based on the outcome of another roll or something else. 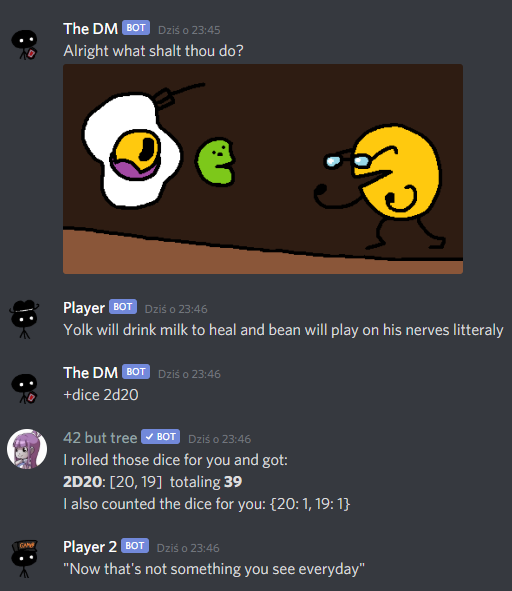 What's worth to note, is that you might want to left click any adventure image, or even "Open original" to see the full quality image. On low size mspaint images it doesn't do much, but in bigger pixel sizes it makes a big difference and can make the adventure much more crisp. 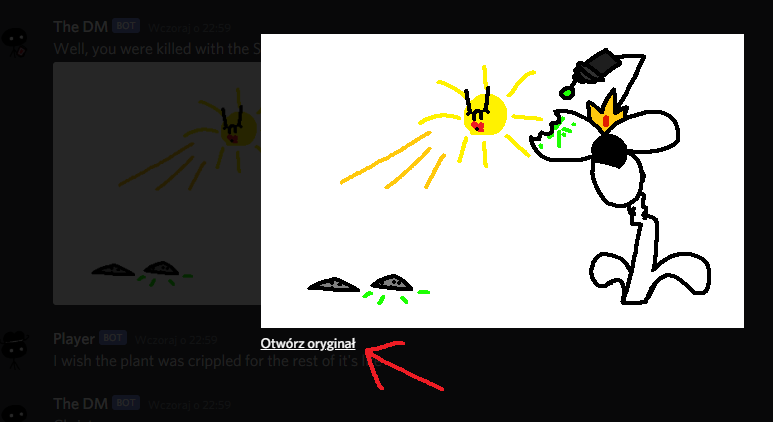 Also, quotes are usually used to indicated RP chat. This demonstration did not go over licenses and ORBs, the perhaps more obscure mechanics, but they are specific so they'd only need an explanation when required. However it should have covered all the basics.

Is MSpain the only way to do this kind of thing? Absolutely not. What I value in it is the amount of experience and bond with it and the people in the server. Since I doubt anyone that even knows me would want to join this kind of stuff (Although I would kindly welcome it, except from strangers, of course), you can do it at home too! I mean it's not safe to do it at home because of sanity loss, but I encourage to do this with your own group. It can be done simply and quickly. Quality is not the point, but the funnies that unravel as you play. Does that mean adventures can't look good? Of course not! It just means that it's not required to be enjoyed.

Listen to the official MSpain sing-along!

Here are some more images of actual adventure examples: 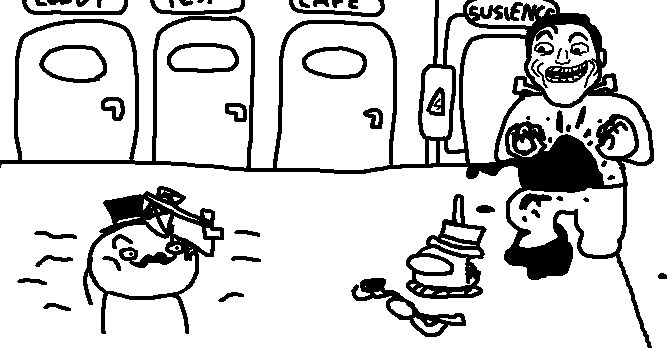 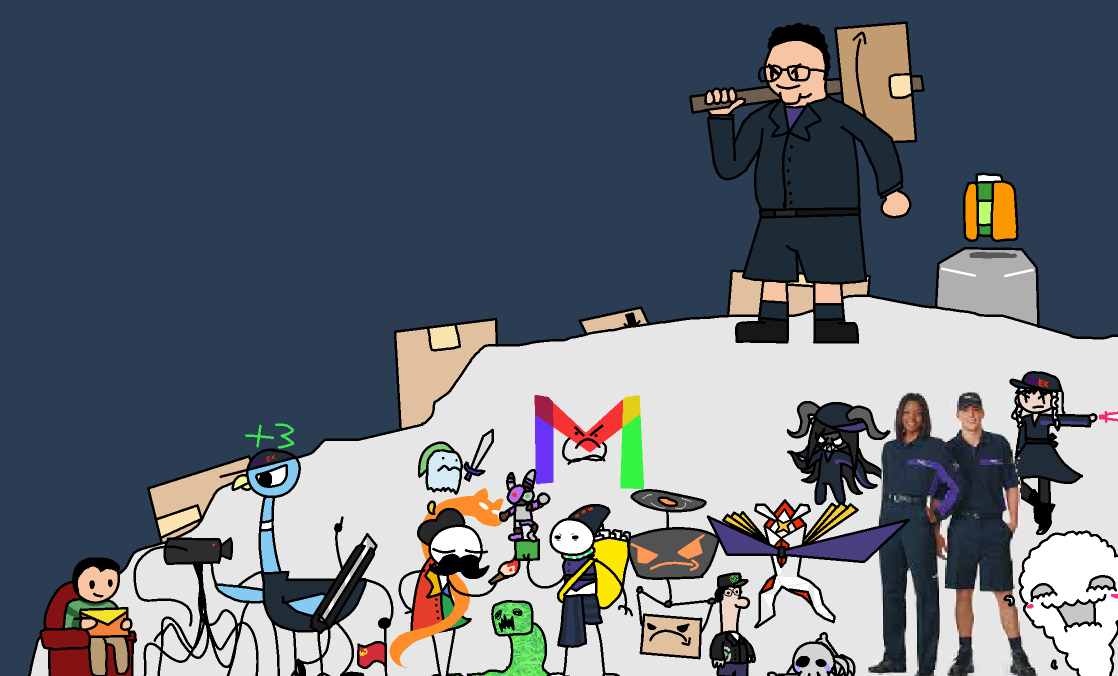 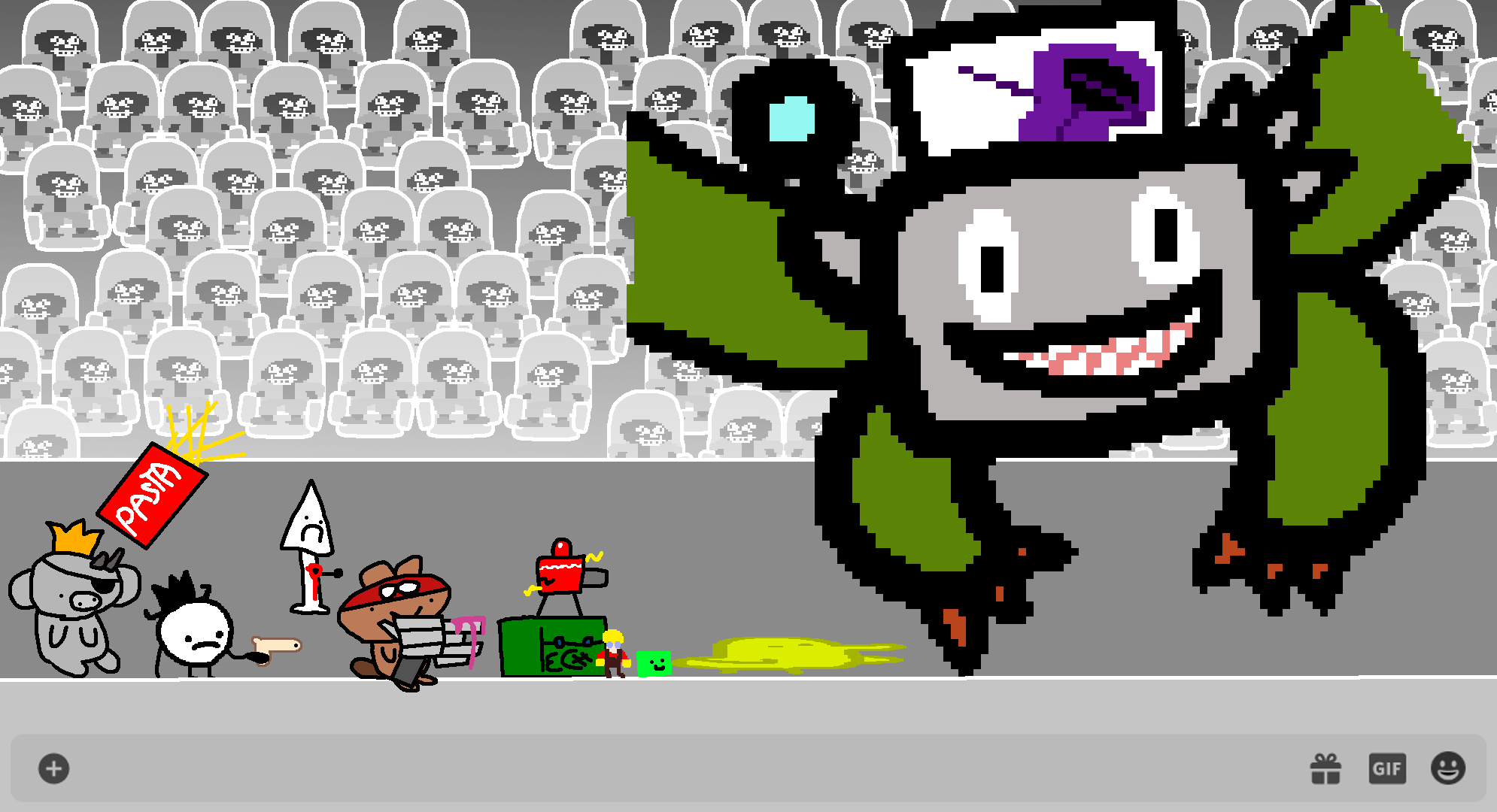 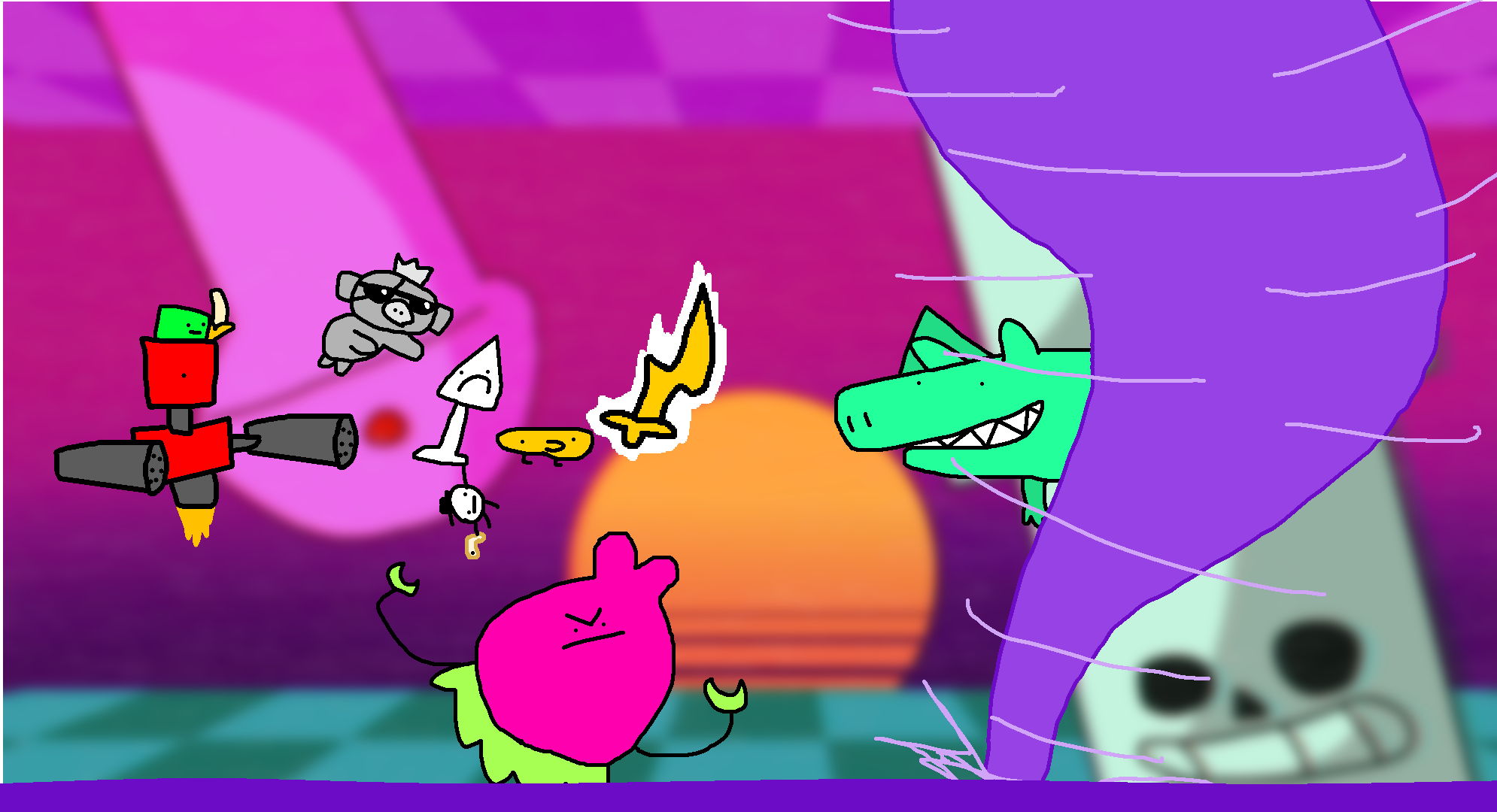 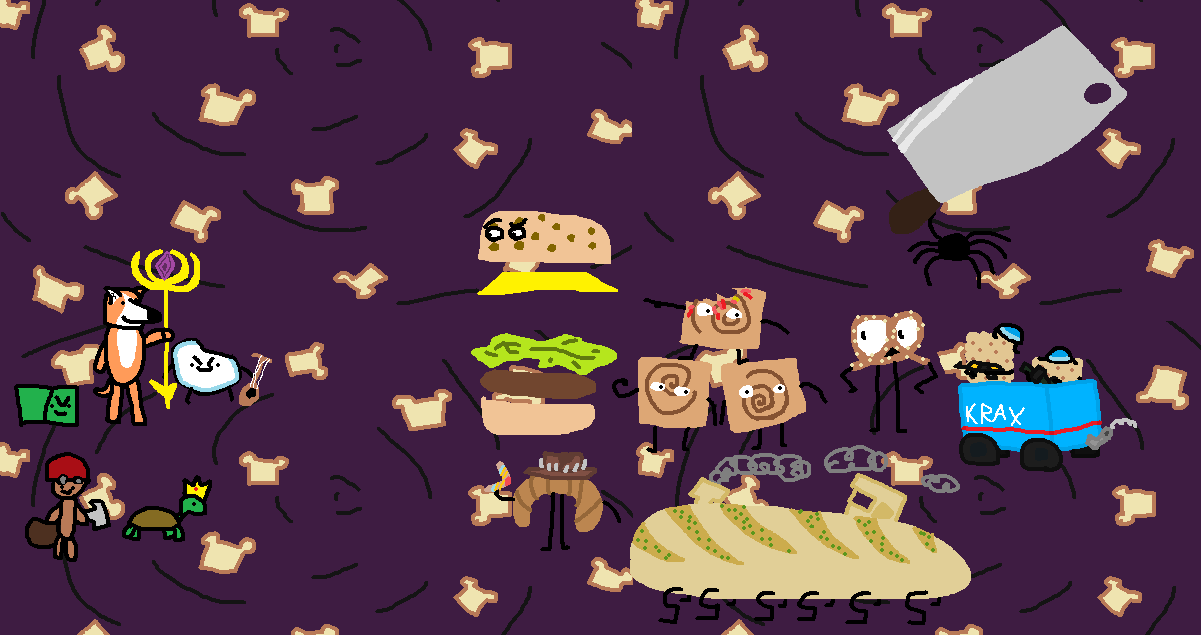